Geology is the study of the Earth’s structure and its substances. Some of our instructors focused on geology and marine geology in their college degrees. This week we want to focus on rocks! Because they rock (lol)!! On our planet there are three major types of rocks; metamorphic, igneous, and sedimentary. These crystals will be small, not necessarily visible. Here on Catalina we have red-brown basalt and red-white rhyolite, from the high peaks of the island, what once were volcanoes.

Sedimentary rocks are the result of rock particles or pieces of once living organism carried by water being deposited on land, river beds, lakes, beaches, and the ocean bottom. Eventually, these layers of particles are compacted into a new solid rock. Seventy-five percent of Earth’s surface rock are sedimentary. The fascinating types of sedimentary rocks composed of dead organic material such as plankton are called biogenous bottoms! Biogenous bottoms are sometimes referred to as oozes depending on the most common type of shell material in the sediments. Calcareous oozes (calcium carbonate, calcite, limestone) result from a dominance of calcium shells which were originally from organisms such as foraminifera, snails, and sea urchins. These calcareous oozes are never found deeper than about 4,000 to 5,000 meters because the calcium dissolves at deeper depths. Siliceous oozes (silica, glass, diatoms, diatomaceous earth) results from a dominance of siliceous (glass) shell pieces made from planktonic organisms like diatoms and radiolarians. Where there are major plankton blooms with a sudden die off there are tremendous numbers of diatoms that reproduce and die each year contributing to the siliceous material on the sea floor. This shell material may build up at the rate of 1mm to 1cm every 1,000 years depending on the productivity. 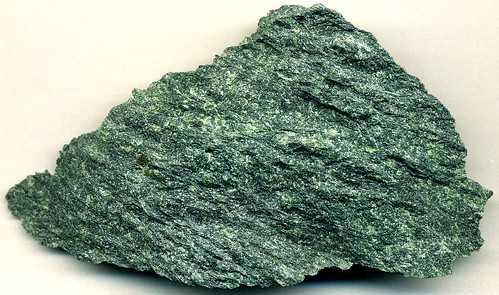